Evolution of Our String Beds

The most important part of a trampoline affecting its performance is the bed. With over 42 years of accumulated research and testing, Dave Ross has engineered the stable and powerful bounce that your competitors deserve.

The Dave Ross String Bed is a bouncing surface like no other. One that changes the way you train and what you think is possible as soon as you start using it.
Dave Ross String beds will reduce how much money you invest in your trampolines as they last about 6 times longer than web beds.
Our String beds can also increase athlete’s progress as they remain stable and powerful throughout their entire life.
If you are currently not using a Dave Ross string bed, you owe it to yourself to learn what can be accomplished on one.
The string bed for a 7 x14 trampoline has a similar power to a competition trampoline with 4mm webbing. All of our string beds are very powerful. In the freestyle world string beds are also called hot beds or fly beds.

Rebound Products makes string beds for 3 sizes of trampolines, double minis, mini-tramps and power tracks. Each of our string beds is designed to match the specific application. For example, smoothness, grip, power, stability, and lifetime are all variables that we customize into each bed type. In addition, they retain their size over time much better than webbed beds.

No Metal edges to catch a leg or an arm! 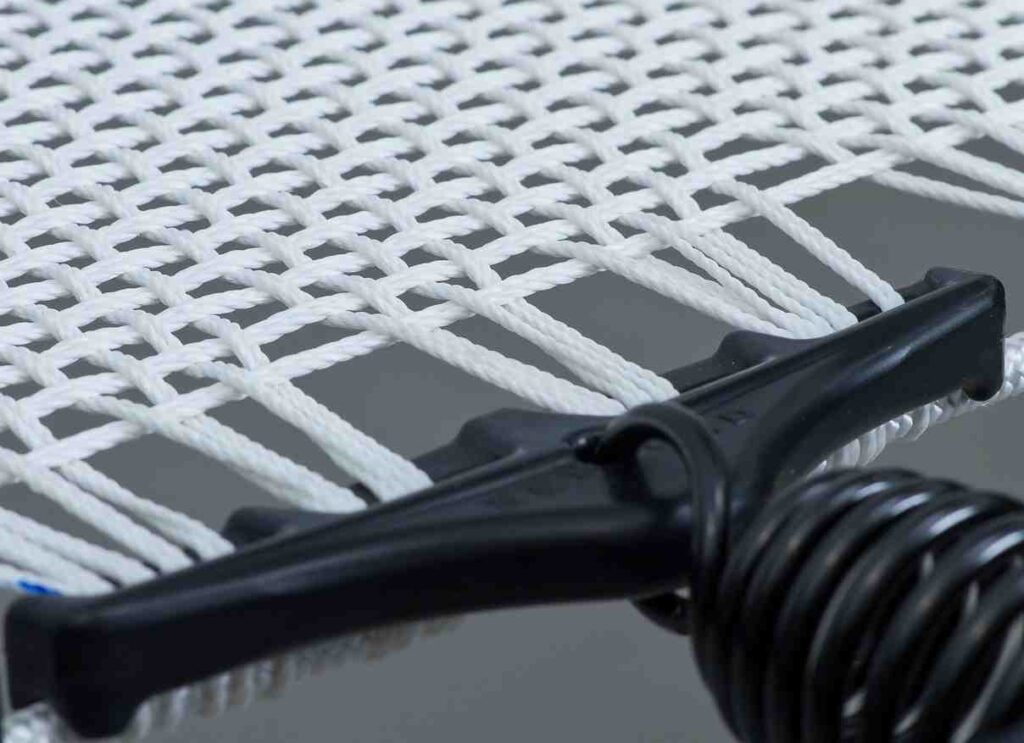 History of the Ross 2 String.

Rebound Products has been making string beds since 1980. Plenty of prototypes were produced in the early years, but from 1991 to 2008 the power and construction of our production string beds remained constant. Our string beds were used at the 1996 and the 2007 World Trampoline Championships, and at many other prestigious trampoline competitions to include World Cups and the Toronto Harbourfront, Reach for the Sky trampoline festival, and countless National Championships.

Since 1978 we have considered the conventional stitched trampoline bed technology as obsolete. This is because the lengthwise stitching used to hold a bed together also tears the widthwise webbing apart, resulting in about 6 times lower lifetime! Furthermore, when a string is worn or accidentally cut on a string bed, a new string can be easily spliced in with knots on the bottom of the bed, with the bed on the trampoline frame, so repairs are cheap and easy! In order to keep a string bed together there is more weaving, which means smaller holes (safer), a better feel on the feet, and also paint added to stiffen the strings. We did plenty of research in the early years to develop our beds to have a very similar bounce to traditional equipment, so our athletes could train on string beds, but still compete well on webbed beds. For most of that time, this was the 4/6mm webbed bed. There were still some small performance differences. The main difference was that the string bed weighed more, but had lower air resistance. So the bounce felt a bit different. To an athlete who did not depress the bed too far the power was similar to 4/6mm beds. To an athlete who really pushed the bed down there was slightly more power. This enabled both small and large athletes to compete successfully, which nicely complemented our adult sport. Also the trampolines’ power was not as dependent on spring tension, so the softer beds which older athletes prefer, were still powerful. Our athletes adapted from string to web beds in 2 to 6 weeks. In 1996, at Worlds, although very few athletes trained on string beds prior to the training days, the performance level was still very high.

At the 2007 World Championships with Rebound Products again supplying the equipment, the sport had become Olympic, so many athletes trained on Rebound equipment prior to that event. This was because that meet was the qualifying event to the 2008 Olympic games. By this point with the development of the sport, and with the older age group involved in the open event, pretty much all athletes were powerful enough to get a better bounce from a Rebound Bed. Meanwhile between 1996 and 2007 our frames had undergone a significant improvement to include the introduction of double braced corners, which subsequently became the industry standard. The combined result was some amazing performances at the 2007 Worlds. In addition, due to our superior springs and diligent work by our staff who fine-tuned the trampolines every night during the event, the bounce remained very consistent over the training and competition days, resulting in a lower than usual incidence of failed routines.
After that meet the international athletes went back home to train on 4/6mm beds and pretty much started complaining. With so many athletes saying the same thing, the big manufacturers started competing to produce the most powerful beds. So now we have the new competition reality with 4mm webbed beds.
Rebound Products responded initially by producing, from 2008 to 2015 a string bed with slightly increased power. This was achieved by opening up the space between strings. This new lighter, lower air resistance bed was very similar in power to the 5/4mm beds used at the 2012 Olympics.

When it became apparent that the 4mm bed was the most common at competitions, we did a massive project involving many different weaves and then fine tuning with 11 actual full size prototype beds tested in the gym, to develop a string bed which would bounce and feel very close to a 4mm webbed bed. The final result has been sold since January 2016. Since March 2016 it has had the new paint job required in the 2017 competition rules. This new bed is very popular. The bounce speaks for itself. A smoother bounce, great power and great control. In gym comparisons with 4mm averaging over a range of athletes showed only minor power differences. The 4mm with higher 10 bounce times, while the new 2 string bed gave higher routine times. On top of the nice feeling on the feet and the superior lifetime, athletes who are recovering from injury can train longer on this more forgiving bed. Now the adaptation time required to prepare for competitions on webbed beds is even shorter.

We have believed since 1976, and proved in 1981 with an 8.4 by 14ft bed prototype trampoline, that the direction for evolution of competition trampolines is towards larger framed trampolines.
Now we think the smoother bounce and wider sweet spot of such a device would be best provided using standard width beds and wider frame pads (and ropes to the springs under the pads) to also create additional safety sideways. We now sell such a trampoline with a non-folding frame. It is already a hit with wall trampoline professionals

Changing international rules is not easy.

Meanwhile, the quest for the perfect bounce continues, with a number of prototype beds tested in 2021.