Trampolines in Canada: Everything You Need to Know

Trampolining Is Fun and a Great Way to Exercise

Important Parts of a Trampoline That Help a Gymnast

This is Rebound Products

Trampoline is an Olympic discipline that symbolises freedom. Multiple somersaults and twists performed at a height of 8 metres help to showcase aerial acrobatics and require precise technique and perfect body control. The trampoline is also used as a basic training device for all sports that contain acrobatic elements.

How Was It invented?

There is little agreement concerning the origin of trampolines. Even though there is no written evidence to support the claim, the prevalent belief is that the early trampoline predecessor was first developed by a French artist named Du Trampolin, and the trampoline was subsequently named in his honour. It is said that Du Trampolin was inspired to invent the trampoline while he was attending a circus.

While there, he had the idea of using the safety net from the trapeze as a type of propulsion and landing mechanism, similar to a jumping mat. He devoted his days to inventing and experimenting with various ways of suspension and materials because he was enthusiastic about the subject. The end result was a net of a manageable size that was acceptable for use by a single acrobat, which significantly reduced the likelihood of mid-air crashes occurring.

Purpose of a Trampoline

The development of greater balance, coordination, and motor skills can be facilitated through the use of trampolines. Your back, abdominal, and leg muscles will all receive a workout with these activities. In addition, you’ll engage the muscles in your glutes, arms, and neck. According to medical science research, trampolining has a beneficial impact on bone health, and it may also assist in enhancing bone density and bone strength.

Introduction of Trampoline in Sports

The first known use of trampolines was in circuses, but they quickly found their way into synchronised gymnastics as well. After being included in the Olympic Games in the year 2000, the activity quickly gained popularity. The World Games have recently expanded to include trampoline competitions as well. Athletes who want to improve their performance in other sports, such as diving or gymnastics, often use the trampoline to do so. 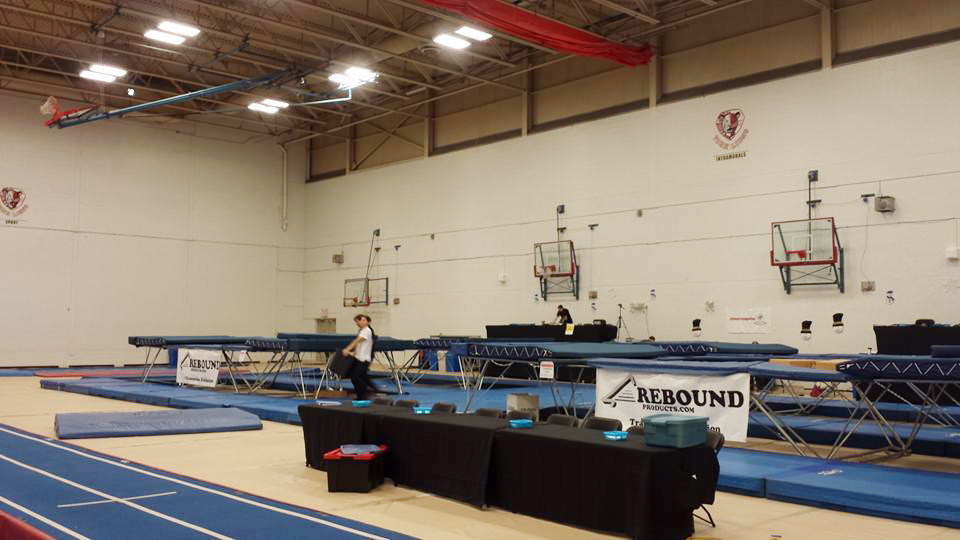 Important Parts of a Trampoline

Not only are trampolines simple to set up and operate, but their lifespan is also far longer than that of other types of equipment. If you haven’t already, it’s time that you give them a try. The following is a list of the main trampoline parts that are utilised in professional equipment.

The frame of the trampoline acts as the structure’s primary support. The top rail features a number of legs in both vertical and horizontal orientations, which together contribute to the unit’s overall stability. A trampoline always has at least four legs to support it. In conclusion, the frame is often constructed using heavy gauge steel. Having a stable structure during your practice sessions will help you to feel more comfortable and make the process simpler.

The springs are another component of trampolines that are absolutely necessary. They are extremely important to the athlete’s well-being as well as their performance. The gymnast is totally dependent on the springs for the bounce that they achieve during their routine. As a result, in order to provide a superior experience, we strongly suggest that you make an investment in high-quality springs.

The mats for your trampoline are one of the most essential components, as well as the ones that get the most use. Typically, they are fabricated using woven polypropylene or a fabric that has been specifically designed for the purpose. Because of their function, the components that go into the manufacture of the mat are of a sturdy nature. They can be anywhere from 8 to 15 feet in length, depending on the practice requirements.

Although trampoline pads and ladders are not considered to be the most vital components of a trampoline, they are essential to ensure the safety of the gymnast. These pads provide a cushion for any falls that may occur and cover all of the springs that are located on the outer frame of the trampoline. Trampoline nets, on the other hand, are designed to prevent users from injuring themselves or falling off of the equipment.

The vast majority of trampolines may be divided into two categories: those used for competition and those used for recreation. Families are the most common group to make use of recreational trampolines for the sake of amusement, physical fitness, and fun in the backyard.

Trampolines come in many different sizes, shapes, and price points. The reason for this is that there are many different purposes for a trampoline, ranging from personal backyard fitness right up to high end athletic training for a variety of sports, including actual competition trampolines.

This configuration is typical for the recreational trampolines seen in backyards. That is for a number of compelling reasons.

All trampolines used in competitions have beds that are rectangular in shape and are twice as long as they are broad.

Following a competitive history, there are now only two common sizes for the sturdy rectangular trampolines that are used in institutional settings. The frames are about 3 feet longer and wider than the beds to make room for roughly 3 inches of frame tubing and 15 inches for the springs all around. In the ’50s and ’60s, Nissen Corporation promoted the use of 7 foot by 13 foot frames for primary schools, but that size is no longer common.

There is still a significant demand for trampolines of this size at establishments that house clubs. It generates a substantial amount of bounce without requiring an excessive amount of energy, which is a huge advantage. Any person of any age can safely bounce on a trampoline that is 9 feet by 15 feet. Because of the reduced area it occupies, the club will have a greater capacity to generate revenue on a per-square-foot basis. In order to generate the same amount of power as a competition trampoline, a Rebound 6 by 12 string bed has a higher air resistance and more weight per square foot than the competition trampoline does. 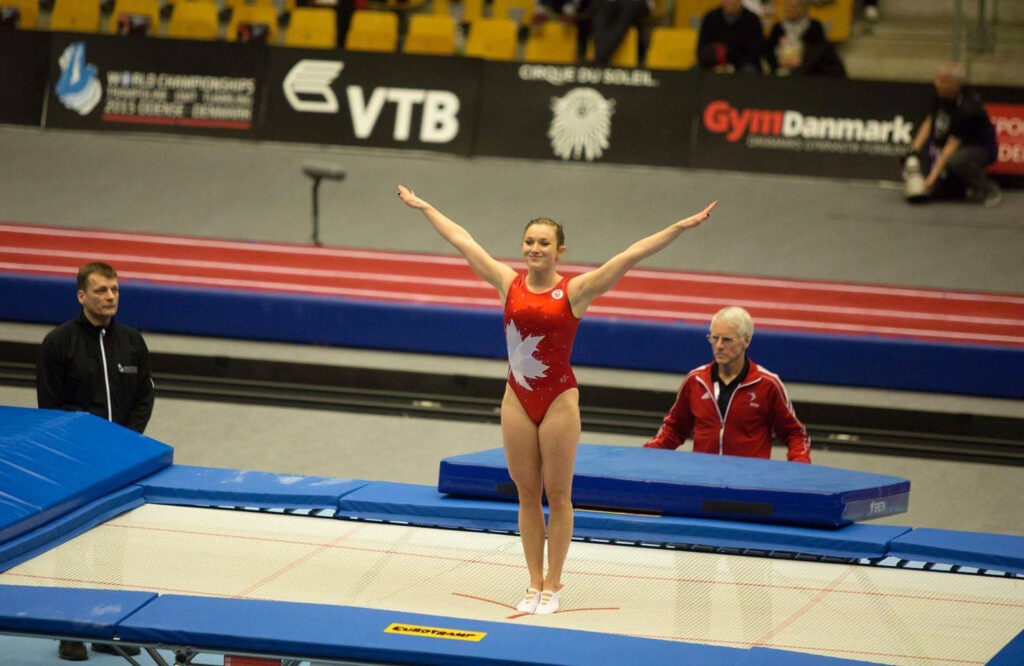 Difference Between a Regular Trampoline and a Competition Trampoline

Even those who compete in trampoline sports begin with the most fundamental equipment. As a result of the fact that modern trampolines do not launch the trampolinist quite as high, the possibility of injury is lower. This trampoline is used in the instruction of straight leaps, landings, and control of the head, torso, and arms. On the Olympic trampolines, the risk of tearing a muscle is significantly increased for those who do not train regularly.

There is no need for a spotter for this activity. On the other hand, in order to reduce the likelihood of children sustaining injuries when jumping on a trampoline in the backyard, spotters or continual supervision should be provided to ensure that the children remain in the centre of the trampoline.

These trampolines are suitable for the safe use of up to five or six younger children, two adolescents, or two adults. However, in order to lessen the likelihood of the trampoline accessories or bed tearing, it is essential that they be able to support the weight of an adult.

Due to the fact that they do not launch people very high, backyard trampolines do not need to be marked.

The springs and beds that are used are of an extremely superior quality. The mattress is more porous and elastic. Because the springs have a higher tension, the trampolinist is able to jump much further and higher. Athletes are able to do three or more revolutions without risking injury. The material enables higher jumps and improves ankle mechanics while also providing support for the knees and hips.

Trampoline athletes may achieve substantially greater heights with the same amount of effort when using Olympic trampolines. There is very little room for error, and this is especially true when it comes to the alignment of the ankle, knee, and hip.

In order to maintain stability and avoid injuries, the Olympic trampolines should never have more than one person jumping on them at the same time. Even for synchronised jumpers, each jumper has their own personal bed.

On average, people jumping on Olympic trampolines can travel up to 8 metres (33 ft) in height. Trampoline jumpers have a target in the form of a contrasted “X” in the centre of the mat. Accidents caused by deviations have led to spotters quickly stopping the jump to prevent injuries.

Steel is used for all trampoline springs. They are rust-proofed using a variety of processes, the most popular of which is pre-galvanized standard spring wire or zinc plating.

Specialised music wire is also used to make high-quality springs. There aren’t many companies that make springs out of music wire. Music wire is extremely robust and long-lasting. It enables a spring of comparable weight to last for an extended period of time. Because galvanised steel springs use cheaper wire, they lose tension faster, necessitating frequent replacement or a mushy, uneven bounce.

Before anyone climbs on the bed, the competition trampoline springs are extended to roughly 15 inches, providing about 39 pounds of force. They should be able to tolerate an additional stretch of at least 15 inches without losing tension.

Replacement of Trampoline Springs for Gymnastics

Replace trampoline springs for safety and performance. If you own a gym, assess how often larger, higher-bouncing athletes stress trampoline strings.

Trampoline bed lines curving and softening indicate the need for spring replacement. A straight-framed curved bed has worn springs. Replace or distribute them evenly over the frame to eliminate the bed curve.

Make sure the springs are completely covered by frame pads that are held up by pad lifters. One athlete at a time on the bed. Tell the athletes, especially the bigger and stronger ones, to stop before they land near the edges. Buy high-quality springs.

When it’s time to replace the trampoline springs on your trampoline, you’ll need to know how far apart the hooks on the old springs were. We strongly suggest that you buy new springs instead of used ones. Set up a call with one of the Rebound Canada trampoline product sales reps if you have questions or want to learn more about how trampoline springs affect how a trampoline works.